Brittany Marion Patch is a dramaturg residing in New York City. She has previously worked as a dramaturg at the San Francisco Mime Troupe and as a production assistant at Leopard Films, Inc. She enjoys working with narrative based art forms across disciplines, developing ideas for theatre, television and new media. She maintains the travel blog, The Small Window, when she can.

Are You a Hipster?

When you think of PBS you probably think of kids television programming or news and serious talk shows with an aesthetic so dated, you just assume their target audience is anyone not too concerned about curating their taste in TV with any modern sensibilities in mind. So it may seem a little jarring but incredibly exciting that PBS’ programming extension, PBSIdeaChannel, is delving into solving burning questions in pop culture with a more youthful and comedic approach. Like their other consistently insightful and well argued shorts, this video in particular makes the case for why the often looked down upon hipster exists in our society. But with the noticeably hip vinyl album covers from Arcade Fire and Television in the background, you can’t help but wonder if this is a sly attempt for post-makeover PBS to save face. 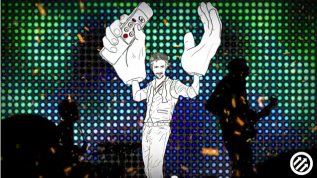 Wayne Coyne and The Saga of the Vibrating Panties

To any dedicated Flaming Lips fan, going the distance to seek higher consciousness is part of the thrill of being in one of the band’s massive crowds. The extremely likely occurrence of experiencing a spiritual awakening or catharsis is catalysed by Flaming Lips’ penchant for psychedelic showmanship in the flamboyantly tye-dyed sonic universe they create for their fans. In an effort to accentuate the experience of their audience who seem to be eternally caught in a neo-hippie haze, the band considered an unorthodox idea that would take their specific brand of space rock and extend the notions of brand expansion beyond typical merchandising efforts. Maybe they learned a thing or two about brand identity from Pitchfork Media. Once simply known as the hotspot for indie rock music criticism, the company has been widening their net to encapsulate more of the entertainment zeitgeist by testing the limits of what media can do to capture cultural moments. The digital real estate Pitchfork.tv has staked out is more than just branding; it’s a 21st century model for the New Music Television, where new media and media companies come together to provide more creative and democratic ways for an audience to engage with musicians and their work. Frames, is exemplary of such creative foresight at Pitchfork.tv. Each installment features 3 to 5 minutes of hilarious banter by today’s best artists and are visually narrated by Pitchfork.tv’s equally hilarious animators. All for the purpose of creating a world where stories like Wayne Coyne’s dedication to enhancing the experience of his band’s female fanbase are as, shall we say, intimate and interactive an experience as music television is becoming.