Filmmaker, FREE FOR ALL!

John Wellington Ennis is a documentary filmmaker looking to mix the funny with the message. His films have explored election fraud, the pharmaceutical industry, and why Rudy Giuliani has so many issues. Soon to be released is his feature comedy with the Upright Citizens Brigade, Wild Girls Gone, starring Amy Poehler in a small-town political satire. Ennis blogs on politics, documentaries, and comedy at www.johnennis.tv.

Amidst the still biting controversy over LeBron James' decision to leave Cleveland for Miami, and how he did it, I think this piece makes it clear the weighty consideration going into such a important choice.  While I do not profess to be a basketball fan, nor do I have special insight into the negotiations leading up to the move, I am fairly confident the determination process was exactly like this. 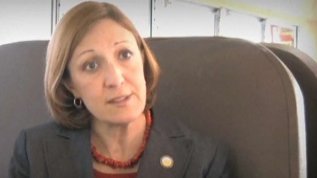 Ohio Secretary of State Jennifer Brunner wouldn't seem like an outsider candidate to run for U.S. Senate since she holds statewide office.  But, she has been told it's not her turn to run, and to defer to her party's preferred candidate.  In a tight Democratic primary in less than two weeks against Lt. Gov. Lee FIsher, Brunner has raised just over $60,000, while her opponent has over $1.8 million.  In this video, Brunner looks to make her modest budget stretch as she inaugurates a school bus painted all silver, a little like Dr. Teeth's tour bus in The Muppet Movie, but not enough like it, unfortunately.  At least she brought her dogs along for the ride.